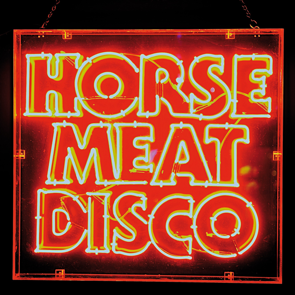 CD 1 brings the peak time selection and features a spread of Salsoul classics re-worked by some of the current masters of the re-edit including Todd Terje and Stupid Human, alongside Ron Hardy’s famed and previously bootleg-only cut-up of First Choice’s ‘Let No Man Put Asunder’. UK producer Andy Williams aka Yam Who? cuts a brand new version of Sha-Lor’s house classic ‘I’m In Love’ and also features as bandleader of Fuzz Against Junk on the Harvey remix of their Talking Heads cover ‘Born Under Punches’ from the ‘90s heyday of Nuphonic Records. New productions feature from the stables of Smalltown Supersound, Rush Hour and more.

CD 2 takes us to the early hours with a hazy mid-tempo sleaze mix, echoing the spirit of infamous New York havens like The Saint. Tracks include the Factory Records classic ‘Reach For Me’ by the late Marcel King and the rare ‘Lovemaker’ by Wham (no relation to the George Michael group), re-issued here for the first time. ‘80s grooves from Miquel Brown from the peak days of ‘80s hi-energy and T.S. Monk’s boogie classic ‘Candidate For Love’ rub shoulders with hand-picked mid-tempo beauties from Sylvester and original Weather Girls incarnation, Two Tons Of Fun.

Now into their seventh year, Horse Meat Disco have continued to lead the way with packed residencies at their HQ at The Eagle in London’s Vauxhall, Lux in Lisbon and Tape in Berlin. Inspired by the music and inclusive ethos of New York’s club scene during the ‘70s and ‘80s, the collective have garnered a unique reputation for amazing parties and unmatchable sets, the quartet of DJs each mixing their own quality blend of disco juice. During 2011, as well as playing their annual UK festival dates at Glastonbury and Lovebox, they will be spreading the love to some of the world’s leading festivals including Vivid in Sydney, Electric Elephant, Bestival and San Francisco’s Pride.