The Movie. (coonskin) with Barry White 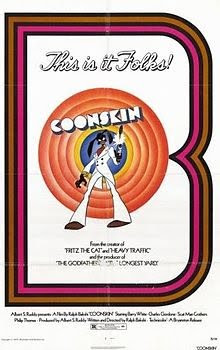 Coonskin is a 1975 American animated film written and directed by Ralph Bakshi, about an African American rabbit, fox, and bear who rise to the top of the organized crime racket in Harlem, encountering corrupt law enforcement, con artists and the Mafia. The film, which combines live-action with animation, stars Philip Thomas, Charles Gordone, Barry White and Scat Man Crothers, all of whom appear in both live-action and animated sequences. Coonskin utilizes a number of references to various elements from African American culture, ranging from African folk tales to the work of cartoonist George Herriman, and satirizes racist and other stereotypes, as well as the blaxploitation genre, Song of the South, and The Godfather