- Nothing Can Stop Us 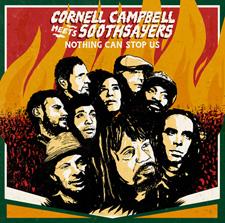 There's something about the act of collaboration that can bring out the best in musicians. That's the philosophy behind our Inspiration Information series, and after some explosive results with artists like Mulatu Astatke & The Heliocentrics and Tony Allen & Jimi Tenor, we're thrilled to have another killer pairing for a new entry in the series.

Cornell Campbell is practically an elder statesman in the field of reggae music, having released classic recordings spanning decades and a number of stylistic shifts. Campbell worked with some of the most legendary producers and labels, from “Coxsone” Dodd at Studio One to ‘70s and ‘80s classics with Joe Gibbs, Bunny “Striker” Lee, King Tubby and Winston “Niney” Observer. His crooning vocals have been compared to Curtis Mayfield and Sam Cooke, but as he himself would say, his style is all his own.

Brixton's Soothsayers, lead by saxophonist Idris Rahman and trumpeter Robin Hopcraft, have built a reputation as one of the hottest live bands on London's competitive scene. The outfit has backed up artists including Mulatu Astatke, Jerry Dammers’ Spatial AKA Arkestra and Hugh Masekela, and formed the nucleus of the band that backed the London leg of the ‘Fela!’ musical during 2011.

Together, Campbell and Soothsayers have created an album steeped in Reggae tradition, while incorporating elements of jazz, dub, and afrobeat. The songs offer a showcase for the talents of both artists, while not sounding completely like either of their individual recordings. In other words, a one of a kind collaboration.

Listen to their first song together, "I'll Never Leave You," below.

For more information, to request a review copy, images or to set up an interview contact Jim at Ampersand PR:
email:
jim@ampersandpr.com
tel: 0754 552 8640
If at any time you wish to be removed from this mailing list, e-mail
jim@ampersandpr.com
Publié par DiscosoulCargo & DJ Misery1 à lundi, mai 13, 2013